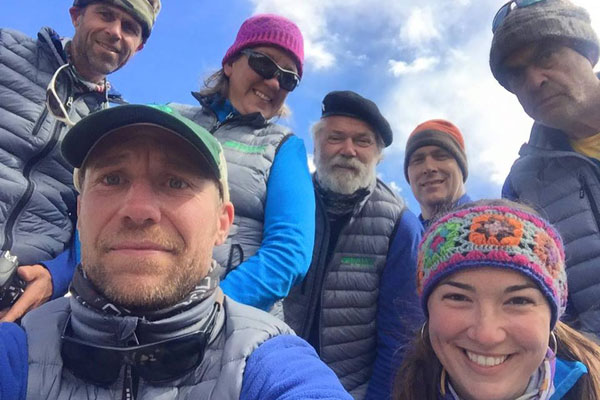 The team has safely come off the mountain; they’ve done something profound – and that profound thing is not that they successfully completed a challenging hike. The hike was always just the vehicle to achieve something much bigger. They wanted to face challenges that Duchenne patients face every day – they wanted to put themselves on the edge because Duchenne patients and their families live on the edge and, finally, they wanted to demonstrate that this community is powerful by taking 1000 people who have Duchenne with them.

The day that the team reached Base Camp, I received the following text from Tonya:

“As we were hiking to Gorek Shep yesterday after lunch, this American guy was sitting on a rock waiting for us. He said, ‘I hope I am not talking out of turn, but we’ve stayed in the same places the last two nights – does someone in your group have a cough?’

I said, ‘Oh yeah, it’s me, but I have had it since we left the States and my chest doesn’t hurt.’

He said, ‘Well, I’m a doctor from Georgia and I specialize in lung conditions, I’m pretty sure you’ve developed pulmonary edema…fluid in the lungs that’s not draining. High altitude makes it worse…’

He gave me some expectorant and continued hiking. The next morning he was returning from Base Camp while we were climbing up. He listened to my chest and said, ‘If you’re going to make it to Base Camp, we need to get some fluid up. So, he draped me over a rock and did a pulmonary percussion. It really hurt, but a bunch of fluid came up. I actually felt better, and we kept going…”

After reading her text, I, of course, went directly to the internet. The internet, of course, made things worse. I found this on the Mayo Clinic site:

I don’t even know how to think about what might have happened if a pulmonary specialist from Georgia hadn’t happened to cross paths with my wife on the way to Everest Base Camp in Nepal. I can only be thankful and draw hope from the fact that he did.

I also don’t really know how to think about my son’s future. Intellectually, I know what they tell me is going to happen. At the same time, I am aware that I can’t know what stranger might be sitting on a rock on the side of our path ahead. “…this American guy was sitting on a rock waiting for us… ”

The team wanted to put themselves on the edge because people with Duchenne live on the edge every day. They did that, and in so doing showed us again that miracles happen. Sometimes, when I am speaking at a fundraiser, I offer the disclaimer that I am biased. Because my son has Duchenne, I badly want a cure. Then I explain that my bias doesn’t change the fact that science is truly close.

I don’t often talk about the other thing that keeps me going – I have seen miracles happen. Inexplicable, unexpected, miraculous things… “ I’m a doctor from Georgia and I specialize in lung conditions…”

As the team prepares to return to Kathmandu, they can do so knowing that this hike achieved something profound. It pulled this incredible community together, it took 1000 boys to the highest mountain in the world, and it demonstrated that we’re not crazy when we believe in miracles.